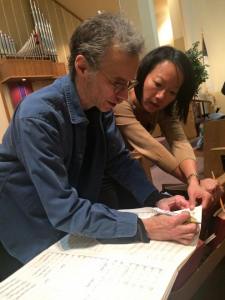 Since her 1999 arrival in Southern Caliornia, Dr. KuanFen Liu has been focused on building community in the performing arts in Ventura County. She served as Chancel Music Director at First United Methodist Church in Ventura through 2016. Since 2004, Dr. Liu has been on the faculty of the Performing Arts Program at CSU Channel Islands, where she teaches Music Theory, Music Appreciation, Music in History, and other performing arts courses. As part of her musical outreach, KuanFen Liu was a founder of Channel Islands Chamber Orchestra (CHICO) and the Channel Islands Choral Association (CICA). These organizations are an expression of Dr. Liu’s vision of bringing classical music to a broad range of audiences and educating communities on its value and versatility.

Channel Islands Chamber Orchestra features professional musicians who live and perform in Ventura County. Members of the orchestra members reach out to the community though performances in small venues.

If all would play first violin, we could not obtain an orchestra. Therefore esteem every musician in his place.