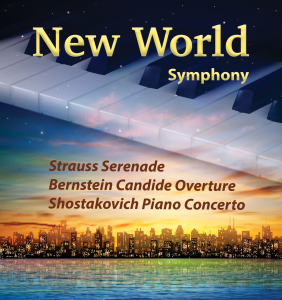 While Leonard Bernstein is known primarily as the long-time conductor of the New York Philharmonic Orchestra, he was also a supremely talented pianist, an author, a teacher, a music lecturer, a philanthropist, and a composer. He wrote the music for three successful Broadway musicals: West Side Story, On the Town, and Wonderful Town, and an operetta, Candide. Based on the novella of the same name by Voltaire, Candide tells the story of the illegitimate nephew of a German baron who travels the world and experiences riches, dangers and romance. While the operetta itself received lukewarm reviews at its premiere in 1956, Bernstein’s overture has become a staple of American and international orchestras. Four and a half minutes in length, it incorporates four songs from the operetta. Some may remember it as the theme song for The Dick Cavett Showon ABC. Over the years, the full operetta had become extremely popular, especially in colleges and universities.

No relation to the waltz-writing Strauss family of earlier decades, Richard Strauss was an internationally-known German composer and conductor. (He appeared twice on the cover of Time magazine.) He is remembered primarily for his operas and his tone poems (e.g. Til Eulenspiegel’s Merry Pranks, Don Juan, Ein Heldenleben). His post-Wagnerian harmonic style was rich and innovative, at times flirting with atonality. In his later years he returned to the lush romantic harmonies and honeyed melodies of his turn-of-the-century style. Often not listed among the greatest composers in history, he is reported to have said of himself, “I may not be a first-rate composer, but I am a first-class second-rate composer.”

Strauss was only 17 when he wrote the Serenade for 13 Winds, as it is often called. Written for flutes, oboes, clarinets, bassoons, horns and a tuba, the single-movement work roughly follows the traditional sonata-allegro form, and features lovely melodies and typically mid-century harmonies. The only hint of the genius to come in later years is Strauss’s preference for melodic and harmonic emphasis over rhythmic interest. This was the work that brought the attention of German audiences to the young Strauss, and it was only seven years later that the former child prodigy shocked Europe with the opening bars of his Don Juan,and introduced to the world a new musical form—the tone poem.

Many believe Shostakovich to be among the five greatest composers of the 20thcentury. An intense, serious man, his modernist approach to composition landed him in hot water more than once with Joseph Stalin. His first piano concerto is really an experiment with Baroque instrumentation, as it was quite common in the early 18thcentury to hear works for keyboard (harpsichord), string orchestra and a wind instrument or two. This concerto is scored for piano, trumpet, and strings. Some have suggested that it is really a double concerto (piano and trumpet).

Written when Shostakovich was 27, the work clearly begins in C minor (following an introductory flash by the strings) and never really strays far from a triadic harmonic structure—although there are passages that employ dissonance as an expressive technique. It ends with a delightful C major coda. The piano part is extremely difficult in places, with wide leaps, fast runs, and rhythmic complexity. Watch and listen as our guest pianist, Loise Lofquist, displays a brilliant mastery of this challenging concerto.

This is by all accounts Dvorak’s most popular symphony, and indeed one of the most well-known symphonies in the world. It is called “From the New World” because Dvorak wrote it in 1893 during his stay in America while serving as Director of the National Conservatory of Music in New York City. Immersing himself in the music of African-Americans and Native Americans during his three-years here, he employed many of the characteristics and idioms of this music in the New World Symphony, as it is popularly called. That is, he employed some of the rhythms, scales and spirit of African-American and Native American music, informing his own original melodies and rhythms. He took the same approach when he used Czechoslovakian folk music and dance as the inspiration for many of his earlier compositions, while not using actual folk melodies. The first movement calls to mind the “wide-open spaces” of the American Midwest, as Dvorak called them. (Dvorak spent the summer of 1893 in Iowa.) The second movement (Largo) features the famous “Going Home” theme introduced by the English horn. Primarily pentatonic in structure (like much African-American and Native American music), it is an original melody by Dvorak, not an American folk song, as many believe. The symphony concludes with a lively coda in E major.